Why did I have to write this blogpost?

Not finance. Not strategy. Not technology. It is teamwork that remains the ultimate competitive advantage, both because it is so powerful and so rare.

This is the starting quote of a great book “The Five Dysfunctions of a Team” from Patrick Lencioni, and is something I can really relate to. But, don’t you also experience that exceptional teamwork is as elusive as ever, despite all the attention it has received over the years? And whether you manage a large executive staff or department, coach an agile team or even if you are merely a member of a team that needs improving, don’t you also experience that is hard to get to real teamwork?

That’s why I spend much time trying to figure out on how to do this better, along the way stumbling upon this book. To quote again:

Building a strong team is both possible and remarkably simple. But it is painfully difficult.

Some of what the book contains was already playing around in my head for a while, and probably in yours, but this book really helped to make underlying causes a lot more clear and explicit, like puzzle pieces falling into place. Building a strong team remains difficult, but reading this book brought me so many good ideas I simply had to write something about it.

The cool thing is that the first part of book contains a fable, a fictitious story. The 5 dysfunctions are introduced in an easy to grasp manner and with clear motivation throughout the storyline.

The fable describes the challenges of a new CEO who is hired to save a high-tech startup that was very popular, but after 2 years in its existence seems to fail to deliver, despite having the best possible and probably best paid executive team in Silicon Valley. I will not tell to much about the fable, you’ll enjoy it more reading it yourself. But this story will definitely help me remember.

The second part of the book contains the theoretical discussion on the five dysfunctions, how they are related and possible ways to cope with them. This is where I want to focus on for the rest of this blogpost.

As challenging as it is to build a cohesive team, the basic concepts of the model are simple.

The model starts from two critical truths observed by the author. First, genuine teamwork remains as elusive as ever. Second, achieving teamwork often fails because of five natural but dangerous pitfalls, called dysfunctions in the model. 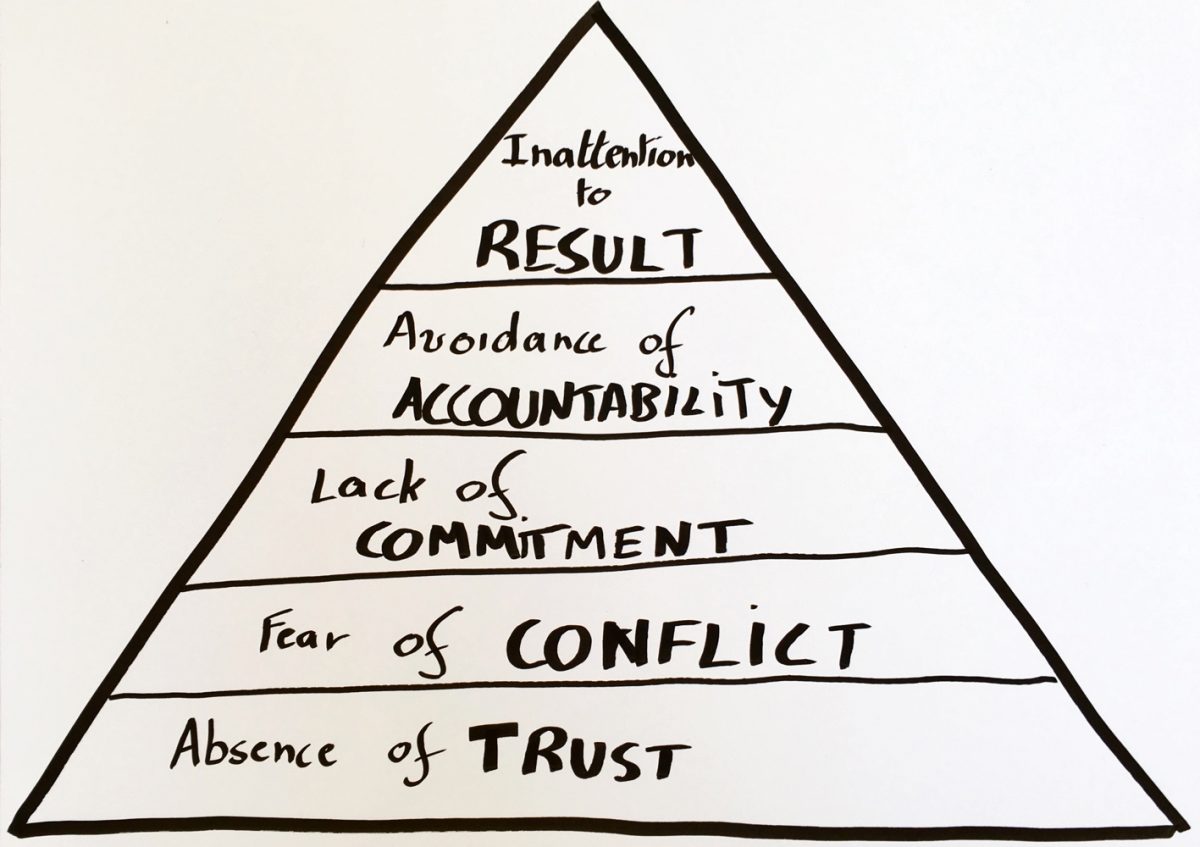 Lets go into a bit more details on each dysfunction (from bottom to top):

If this is not clear yet, consider what could be the reverse:

What a great team this would be!

Why should you know this model?

The first reason is the simplicity of the model simplifies applying this in practice. The model is easy to remember and sticks in your head. This makes it easier to recognize problems. And everybody knows that really understanding the problem brings you already a long way towards solving it.

The book itself also contains tips on how to overcome the dysfunctions. But for me this is highly contextual and I noticed I liked this part of the book a bit less because the tips applied less on my context. Also, with respect to solutions for a leadership team, I like ‘the Advantage’ also from Patrick Lencioni a lot more (but that may be content for a future blog post :-)).

A second reason is that understanding the relations between the dysfunctions can be a real help to understand and solve the underlying problems and get to a great team. An important part of the model is that these dysfunctions are not distinct, but form an interrelated model. If you have more of a dysfunction at the bottom of the triangle, chances become higher you also have a dysfunction at the top of the model. But this is not absolute. E.g. you do not need 100% of trust before you can have the start of a healthy amount of conflict. The reverse can also be true: only one of the dysfunctions can be enough to inhibit success of the team.

Anybody interested in team performance should read this book and know this model. Because of the combination of the fable and explanation it is fun to read and easier to remember.

Don’t expect to find a lot of ready-to-use recipes in the book to solve the dysfunctions, but seeing and understanding the dysfunctions brings you already a long way towards solving them within your own context.

Solutions to the dysfunctions are highly contextual, but ultimately come down to practicing a small set of principles and embracing common sense with an uncommon level of discipline and persistence for a long period of time. In this, remember the following quote:

Building a strong team is both possible and remarkably simple. But it is painfully difficult.